Past and Present Progressive

Writing and blogging by Stephen Pigney

During the recent Westminster attack, a photograph was taken of a young Muslim woman, wearing a hijab, walking past one of the victims. She clasps one hand to the side of her face; she is looking at her phone, which she holds in her other hand. Behind her, a victim is being attended by two women; a group of four people are standing around, two of them looking at the victim, two of them talking to one another; and another woman, with grey hair but largely obscured from view, also appears to be walking by.

As The Guardian has reported, there have been several outraged responses to this photograph. Tim Young, who describes himself as a “political comedian” (despite his numerous tweets exhibiting neither comedic ability nor political intelligence) claimed that the image “could end up being one of the most iconic of our time”. The faulty, unspoken logic behind his tweet is this: an apparently Muslim terrorist act has been perpetrated; a young Muslim woman is unconcerned about this; therefore all Muslims are, at the very least, unconcerned by Islamist terror, and quite possibly approve of it.

Another Twitter user (who goes by the handle of “@SouthLoneStar”, moronically declares “Fuck Islam” in his profile and seems manically obsessed with tweeting endless, mindless and offensive Islamophobia) contrasted the photograph with that of the Conservative MP Tobias Ellwood attempting to save the life of the police officer stabbed by the assailant, suggesting that the two images show “the main difference between Christians and Muslims”.

Jamie Lorriman, the photographer who captured the image on Westminster Bridge, has said that the image has been “misappropriated” by those seeking to make Islamophobic capital from it. He points to another photograph in the sequence in which the Muslim woman is clearly distressed, and has commented: “Looking back at the pictures now, she looks visibly distraught in both pictures in my opinion. She’s in the middle of an unfolding horrific scene… I think her expression says to me that she’s horrified by what she’s seen and she just needs to get out of the situation.” As Lorriman adds, it’s “impossible to know” what the young woman was thinking.

I used to teach a class on visual evidence to first-year history undergraduates. One of the main points I tried to get across in the lecture was the importance of being highly critical of images as a form of evidence. In particular, we can be easily seduced by the power of the camera, and the notion that “the camera never lies”. But that notion is a fallacy. A photograph neither lies nor tells the truth; it simply records a tiny fragment of time and space. It then becomes subject to multiple interpretations that invariably have little relationship to the reality of the scene it depicts. 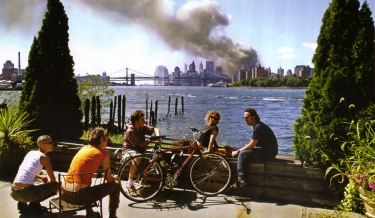 One of the images I showed the students is a controversial photograph taken by Thomas Hoepker during the 9/11 attacks. It depicts a group of young people in a Brooklyn park, casually dressed, looking relaxed and chatting among themselves while in the distance behind them smoke pours from the World Trade Center. For some commentators, the image exhibited the detached, possibly callous nature of modern youth: while thousands are dying across the Hudson, these New Yorkers are carrying on as normal, seemingly careless about the atrocity.

But there are numerous problems with such an interpretation. Photographs, which show 1/500th or 1/1000th or 1/2000th of a second of time, tell us little about what their subjects are thinking or feeling. We have no way of knowing from the 9/11 image what these young Brooklynites were talking about, what their emotional state was, or what was going through their minds. Subsequently, one of those in the photograph has said that the group were “in a profound state of shock and disbelief” and that they were “in the middle of an animated discussion about what had just happened”. Five minutes or half an hour earlier or later, were they crying, or hugging one another in consolation, or standing with heads in their hands? The photograph gives us none of this information. Yet it becomes enough for some commentators to make a sweeping and condemning judgement on modern youth, and to trumpet this photograph as capturing a supposed social and cultural truth.

But ask this: how are people supposed to appear during such an incident? Should these New Yorkers have been exhibiting a constant state of distressed wailing on the off chance that a photographer may have been in the vicinity?

And consider: how many unstaged wedding photographs are there which show the bride or groom looking, in a seemingly unguarded moment, miserable? How many staged photographs have we all been in when, no matter how hard we tried to maintain a fixed smile and open eyes, we unfortunately get caught looking unhappy and half asleep? Later we may protest that the photograph misrepresents us: we were genuinely happy, we may sincerely and honestly say, but we are stuck with an image that is repeatedly and unfairly cited as evidence to the contrary.

And ask this: if we are quick to condemn the New Yorkers for their apparent lack of concern over 9/11, what do we say about the photographer choosing to spend his time in a Brooklyn park and focus his attention on park-goers? And what, indeed, do we say about ourselves, fixating on this image rather than on, say, images of the victims in Manhattan? 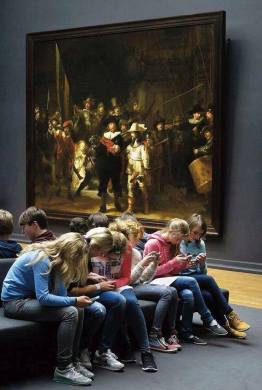 Recently I was involved in a brief Facebook discussion about a viral image of schoolchildren looking at their phones rather than at Rembrandt’s The Night Watch on the wall behind them. A “metaphor for our age”; “the ‘distracted society’. No wonder we’re in the shape we’re in now”; “what a sad picture of today’s society!”: these were some of the comments about the photograph on Twitter.

But the photograph tells us little, and is potentially highly misleading. It says nothing about what the kids were doing the rest of the time in the gallery; and it reveals nothing about what they were looking at on their phones. The reality is (as later confirmed by the teachers accompanying the school party) that the children were, as part of an assignment, researching Rembrandt’s painting using an app on their phones. For some, this is still a dismal comment on our society; but would they complain if, instead of learning about the painting on their phones, the children were all reading a catalogue? The Night Watch is not an easy painting to interpret; we all need some guidance to help us, and it is not obvious why such guidance is any better in physical rather than digital form.

So the photograph in fact shows children interacting with art; indeed, they appear rather engrossed in what they are learning about Rembrandt’s painting. Yet, by ignoring all context and by leaping unthinkingly to an abrupt judgement, this photograph ends up being used to illustrate the idea that young people are so hopelessly obsessed with their smartphones and social media they are no longer capable of interacting with art (and, perhaps, reality in general).

For those inclined to a negative view on the culture and character of young people, or on the effect of digital media on modern society, then it is as easy as it is erroneous to read into the photographs of the 9/11 park group or the school party in the Rijksmuseum confirmation of existing beliefs. Similarly, those already prejudiced against Islam will seize on the photograph of the young woman on Westminster Bridge and distort it to fit their own agenda.

We are prone to see what we want to see, framing images to fit a narrative that suits our purpose. The Islamophobes haven’t looked at this photograph with any critical thought: they have simply read into it their existing prejudices, and they have used it to frame their anti-Islamic narrative. Desperate to exploit the Westminster attack for their own agenda, they have framed it as evidence of the supposed evils of Islam and the dangers of multiculturalism and immigration.

As the facts of the attack slowly emerge, these misleading interpretations look ever more irrational, hateful and nonsensical. But facts and reality count for little in the feverish minds of the Islamophobic far right. Hence they try to build grand “truths” out of an image that, showing no more than a millisecond of time and a minuscule slither of space, reveals next to nothing about the people it depicts, and even less about society and culture as a whole.

2 thoughts on “Photographs, truth and the Westminster attack”