Past and Present Progressive

Writing and blogging by Stephen Pigney

Both individually and socially we engage in acts of remembrance. We commemorate and memorialize, sometimes controversially, sometimes with mistakes and distortions, but always because memory is important. For memory is the fabric out of which our identity is fashioned. We remember the past—or think we remember it—because it is the past that provides the lines and contours of the present. The more we forget, the less we know who we are; and profound amnesia invariably leads to a serious disturbance of identity. One reason why history is essential is to prevent the loss that follows from forgetting.

To study history is to be made acutely aware that the overwhelming majority of people who have ever lived have left little or no trace. Only rarely, and then usually owing to astonishing chance, has anything other than the names reached us of one or two out of the millions and countless generations who worked the land, who serviced farms, villages, towns and lords, who established households and raised families—and there are millions more for whom not even a name will ever be attached in the historical record. Within such vast gaps is it possible to remember?

Charles Reginald Pearce (1911-89), ‘Wag’ to his family and friends, was my maternal grandfather. Suffolk was his county: he was born, he lived and worked, and he died there, and probably spent no more than a few days in total anywhere else. In this most rural of places, where fields and soil are the body and blood of the community, he never owned any land—but he worked it throughout his life, one of the thousands of farm workers who together secured the most fundamental needs of society.

Wag’s life would almost certainly have comprised decades of toil. For most of the twentieth century few occupations were as hard and poor as that of the farm worker. Little value was attached to agricultural workers: pay was pitiful and considerably lower than those working in industry, insecurity and exploitation were rife. Many were as good as worked to death—they ‘toppled over’ at the end of their working life, as one farm worker comments in Ronald Blythe’s Akenfield (1969). George Orwell frequently noted the dreadful plight of the farm worker (see, for example, his 1931 essay on ‘Hop-picking’), and in his novel Coming Up For Air (1939) Orwell’s narrator George Bowling reminisces: ‘The farm-hands worked frightful hours for fourteen shillings a week and ended up as worn-out cripples with a five-shilling pension and an occasional half-crown from the parish.’

But of my grandfather’s personal experience I know little. I remember him fondly: he talked sparingly, but he was always warm, humorous and kind, and had an aura of contentment. He played a good game of village bowls (there were several trophies on his mantelpiece) and an intimidating game of rummy–intimidating because of his tactic of announcing at tense points in the hand that he needed only ‘one card’. Despite the enduring poverty and meagre circumstances (it was only in the late 1960s, for example, that his home first had electricity), he seemed to have been satisfied with his life: the roots that he had established in the land and his work were themselves, it seemed, more than adequate compensation for the hardships and lack of material rewards.

It was only later, however, after he had died, that I truly reflected on his life. As a child, for all my love for my mother’s family, I embodied the conventional superiority towards common rural folk. Suffolk people seemed a strange, unsophisticated, backward, amusing lot, and their rustic concern for turnips and beetroot, crop rotation and weather patterns, struck me as primitive and hardly deserving attention in comparison to the higher civilization of cars and computer games, Thatcherite economics and mortgage patterns, of the Essex that I inhabited.

In my first year at university, a few months after the death of my grandfather, I had to write an essay on eighteenth-century agriculture. An impossibly tedious topic, I thought—but somehow I needed to summon up the enthusiasm to get started on it. So I forced myself to think—to meditate even—on what the land meant, on the work that goes into it, on the vitality of this work, for without the labours of millions throughout the centuries, among whom Charles Pearce was one, nothing else would be possible. And suddenly, not only was I able to write my essay with real interest, but I also came to a deep respect for the life and work of my grandfather. 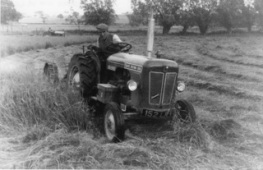 Last year I saw a photograph of Wag sitting on a tractor; it must have been from the 1960s, a decade which witnessed the mechanization of the agricultural economy accelerate in pace. It was a revolution: centuries, millennia even, of traditional practices were disappearing; an entire way of life and working was being obliterated within a thin slither of historical time. My grandfather was one of the last generation to have worked in the older rural economy; with him, and his rural contemporaries, would die our last connection to a social and working world that had been the bedrock of our history. George Ewart Evans introduces his oral history of a Suffolk village, Ask the Fellows who Cut the Hay (1956), on precisely this theme:

An attempt has been made in this book to record what is left of the old rural community as seen in the East Suffolk village of Blaxhall and district around it. For this purpose, the experience and memories of a group of old people have been set down… [T]he oral tradition is at this time of the greatest historical importance. During the past fifty or so years the life of the countryside has been revolutionized and the rate of change within this period has been greater than it has ever been in recorded history… At present, old people in this countryside are survivors from another era. They belong essentially to a culture that has extended in unbroken line since at least the early Middle Ages. They are in some respects the last repositories of this culture; and for this reason should have the respect given to any source of valuable historical information… [O]nce this knowledge is under the soil no amount of digging will ever again recover it.

Gazing at the photograph of my grandfather astride the tractor, I wanted to ask him about his life, what he felt about tractors replacing horses, his experience of the social and cultural changes of his world, and his memories of the old world. But he is gone and with him the experience and memory is lost, almost forgotten now—which is why the work of George Ewart Evans, of Ronald Blythe in Akenfield (which also preserves the memories of a Suffolk village during the same period), and memoirs such as Laurie Lee’s Cider with Rosie (1959), similarly suffused with the sense of a long age in rural England drawing to a close, are so valuable. Among other things, they are memorials to a world that we have lost but without which our own world would not be.

My grandfather was not only a farm worker; he was also a husband and father. He married Rosie (1920-2005) and together they brought into the world, and brought up, Mick, my uncle, and Brenda, my mother. Wag and Rosie had four grandchildren: my cousins Jason and Caroline, my sister Anna, and me. There are great grandchildren too. Even if the life of Charles Reginald Pearce leaves little impression on the historical record, traces exist.